If a sample can be analysed at atmospheric pressure and not under vacuum, analysis time is greatly reduced because it is not necessary to wait for the sample region to pump down. Furthermore, biological samples can be analysed in conditions closer to their natural environment. Several ionisation techniques are now available to utilise this advantage.

DART, Direct Analysis in Real Time requires minimal sample preparation. Simply position the sample in the gas stream and produce spectra. DART produces protonated molecular ions from organic molecules on, or close to a surface. DART operates in atmospheric conditions and requires minimum sample preparation and no specialist reagents. A gas supply is all that is necessary. After fitting the DART to a mass spectrometer, spectra are produced within seconds with minimum operator training. DART was invented by Cody and Laramee at JEOL Inc in the USA. It uses metastable helium atoms to ionise the sample. Because it is a very soft ionisation process, only protonated molecular ions are formed with no fragmentation, so interpretation is simplified. Identification and structures can be confirmed using either exact mass measurement or MSMS

To date, DART has been used successfully to solve many real problems extremely rapidly 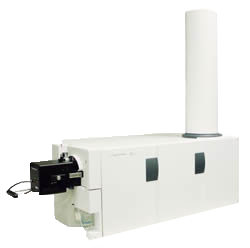 Atmospheric-Pressure MALDI has all the sensitivity of conventional vacuum MALDI but because it is not necessary for the sample to be under vacuum, changing sample plates takes a few seconds, greatly reducing analysis time. The Atmospheric-Pressure Matrix-Assisted Laser-Desorption Ionisation (AP-MALDI) source enables mass spectrometers fitted with an electrospray or nanospray source to have the additional capability of MALDI. It is called AP-MALDI because, unlike vacuum MALDI, ionisation takes place under atmospheric conditions. This provides several important advantages including convenience, speed of analysis, simplicity of operation and cost.

You can find out more about which cookies we are using or switch them off in settings.

This website uses cookies so that we can provide you with the best user experience possible. Cookie information is stored in your browser and performs functions such as recognising you when you return to our website and helping our team to understand which sections of the website you find most interesting and useful.

Strictly Necessary Cookie should be enabled at all times so that we can save your preferences for cookie settings.

If you disable this cookie, we will not be able to save your preferences. This means that every time you visit this website you will need to enable or disable cookies again.